Or Skype for Business (Lync):

You can join a meeting by using apps from a pc, a tablet or a smartphone, but you can also use the browser based version (it works with newer versions of Chrome or Firefox) 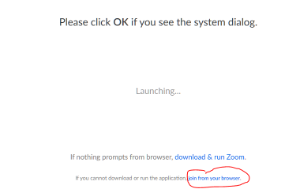 BnF discovered that NAS 5.6 no longer sends cookies with any requests and this was having an effect on the quality of their harvest. The bug was easily reproducible and was found to be have been introduced between versions 5.4.2 and 5.5 so the Netarkivet production system is also affected.

After a considerable amount of detective work, we discovered that the bug came not from a change in NAS code or Heritrix code but from a change in one of the 3rd Party libraries - specifically we had somehow come to downgrade the version of guava shipped with NAS. Simply substituting a more recent guava version in the bundler zip makes the issue go away. What we have not done:

Colin and Clara have spent some time analysing the NAS modifications to Heritrix to see what would be needed to get a community-version of Heritrix that we could use in NAS. There seem to be three changes we would want in:

Even if we aren't able to get our pull-requests accepted quickly, we should still base future releases on this work as we would then have a Heritrix version very close to the community version, making it easy to pull in future upstream changes.

Status of the production sites

We focus on extremists sites, we are working on the identification of left wing, right wing and Islamic extremist sites.

Other projects keeping us busy (almost the same as last month):

Currently, these are our main tasks: